NPA not capable of defeating the government – Task Force head 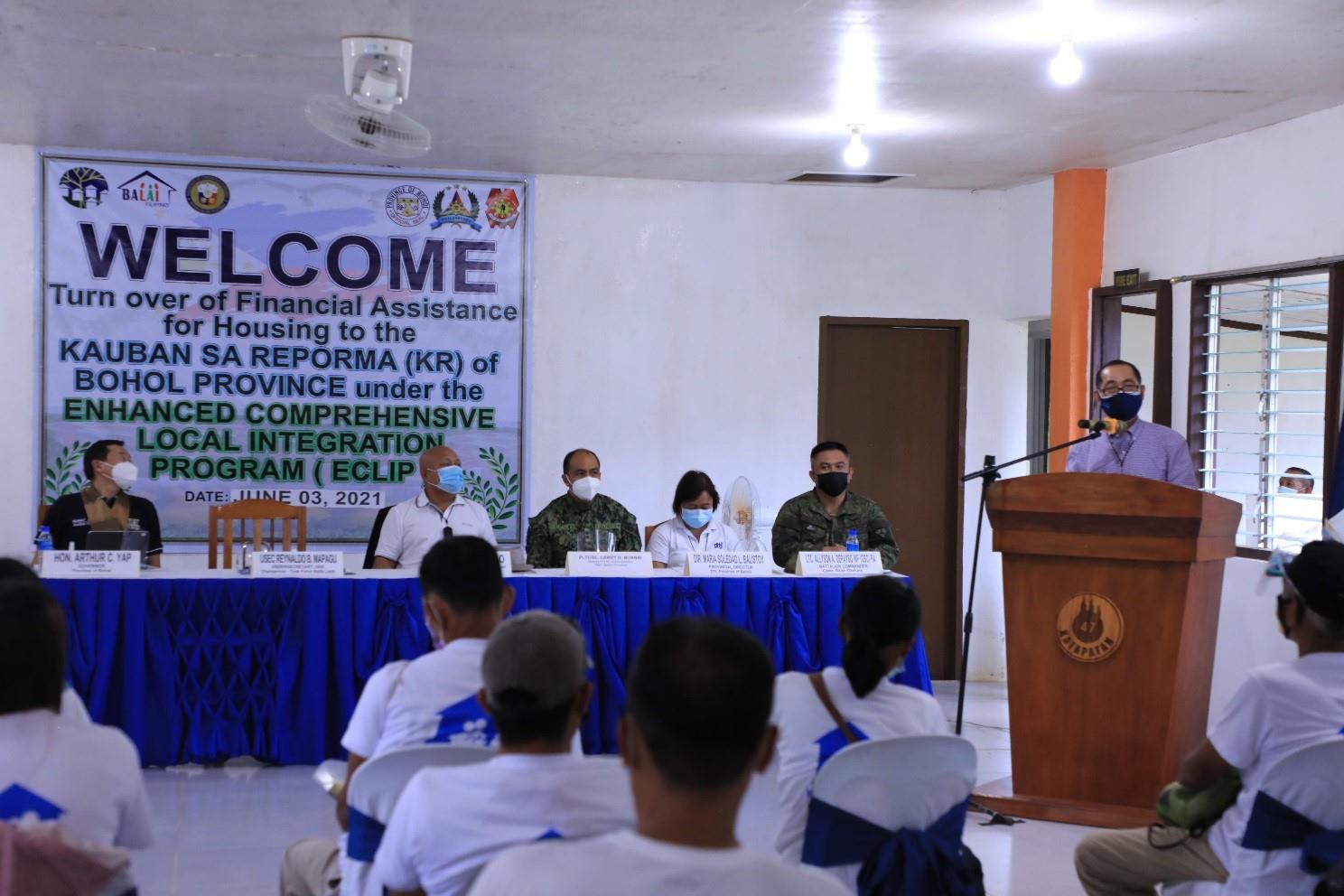 RIGHT DECISION. Task Force Balik-Loob Chair Undersecretary Reynaldo Mapagu commends former rebels (FRs) for their decision to return to society, emphasizing that they can now enjoy life with their families, unlike active members of the NPA, who do not have a chance to win against the Armed Forces of the Philippines. During the event, NHA General Manager Marcelino P. Escalada together with Bohol Governor Arthur Yap and Usec Mapagu turned over a total of PhP1.6 million in financial assistance for housing to 16 FR beneficiaries.Type Your Message.

“The communist rebels, particularly the New People’s Army or NPA, cannot overthrow the government; not then, and especially not now,” Undersecretary Reynaldo Mapagu, Task Force Balik-Loob (TFBL) Chair, adamantly said during the turnover of financial assistance for housing to 16 former rebels (FRs) held at the headquarters of the 47th Infantry Battalion in Camp Rajah Sikatuna, Barangay Katipunan, Carmen, Bohol.

The housing assistance is one of the benefits for FRs under the Enhanced Comprehensive Local Integration Program (E-CLIP) implemented by TFBL. National Housing Authority (NHA) General Manager Marcelino P. Escalada, together with Bohol Governor Arthur Yap and Undersecretary Mapagu, turned over a total of PhP1.6 million financial assistance to the 16 FR beneficiaries during the event. Also present during the activity was Defense Undersecretary for Capability Assessment and Development Cesar B Yano.

Undersecretary Mapagu, a retired Army general, emphasized that, with the modern capabilities of the military coupled with the practice of good governance, insurgency will not be able to rule over the legitimate leadership of President Rodrigo Duterte. He added that it is time for the remaining rebels in the mountains to realize that their 52-year attempt to topple the government only serves as excess baggage in the rise of the Philippine economy, and that they must end their worthless struggle now and return to the fold of the law before it becomes too late for them.

The TFBL Chair also expressed his hopes that the remaining NPA members will heed the call of the government so they, too, can enjoy the “dividends of peace.”

“We are all Filipinos; we must not fight. Rather, we should help one another to achieve peace for ourselves and for the country. And to all of you who went back to the side of the government, you did the right thing. I assure you that the government is sincere in providing you with the basic services and other assistance that you may need,” the Undersecretary said.

During the event, Undersecretary Mapagu also announced that as soon as the Senate also concurs with the Amnesty Proclamation of the President, eligible former rebels who are presently incarcerated because of cases filed against them, except for crimes such as but not limited to genocide, rape, terrorism, and illegal drugs, will be given absolution of their offenses in pursuit of the flawed ideology of the communist terrorist group.

E-CLIP is the flagship program of President Rodrigo Duterte’s administration that seeks to effect social healing and national unity through a whole-of-nation approach towards the higher objective of having a just and lasting peace. It provides social equity to former members of the CPP-NPA-NDF and the Militia ng Bayan by providing assistance in their reintegration process into mainstream society. These benefits do not serve as an end, but rather a means to aid the FRs in securing a foothold in restarting their lives.

TFBL, on the other hand, is an interagency body headed by the Department of National Defense that monitors and assesses the implementation of E-CLIP at the national level. Established pursuant to Administrative Order No. 10 of President Duterte, TFBL includes the Department of the Interior and Local Government (DILG), Office of the President, National Housing Authority (NHA), the Office of the Presidential Adviser for Peace Process (OPAPP) and the Department of Social Welfare and Development (DSWD) as well as other government agencies and instrumentalities that may be tapped to provide additional benefits and services to FRs.